I don’t watch the movies.

I don’t watch that tv show everyone loves.

I’m just not a horror movie kind of gal.

I have a super visual imagination, and stuff like that gives me nightmares for years.

I still have nightmares of the sand sharks from Beetlejuice, the raptors from Jurassic Park, and those freaky fortune cookies from It.

I used to teach high school English, and for my Brit Lit class, we taught Macbeth. There’s a film version of this play starring Patrick Stewart that we showed after the completion of the unit that has scarred me for life.

So you wouldn’t think that a girl like me would enjoy Halloween as much as I do. It’s one of my favorite holidays of the year. I carve cannibalistic pumpkins…

and make a murdered meatloaf man for dinner…

We used to trick’or’treat in my neighborhood, the neighborhood across from mine, the one behind ours, and the one down the street a bit. We’d drop off pillowcases full of candy and pick up empty ones to fill. (My mom had used puffy paint to draw a cute little witch on my pillowcase.) And once we were too cold or it was too late, we gathered in the living room for bartering and trading.

Dad always got all the Mounds bars because we didn’t like coconut and neither did Mom. When we were little, Mom made us all pile the candy together in one bowl so there wouldn’t be as much arguing, but when we were older, we were allowed to stash it ourselves. I had a heated water bed that sat atop four drawers. I kept my pillowcase of candy stashed there so that my brother couldn’t find and steal my Reese’s cups. It often lasted until Christmas, when only the Fireballs and Smarties were left to be thrown away.

But my favorite thing to do each year was to come up with a costume of my own. There were a few years where I bought my costume pre-assembled for like $30 in that little plastic bag that just gets thrown away because there’s no way you’ll never be able to do the origami folding that got it in there in the first place. The older I got, the more I enjoyed Good Willing to piece my costume together, and the more unique the costumes, the funnier they are, in my opinion.

Because anyone can dress up like a nerd, but I was an engineer.

Because anyone can be a witch, but I was a Healer from St. Mungo’s. 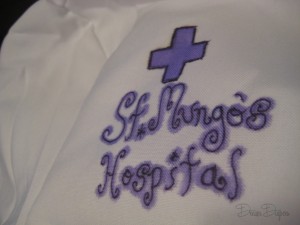 Because anyone can be Raggedy Ann, but I was a porcelain doll (and my sister was an “emo” kid). 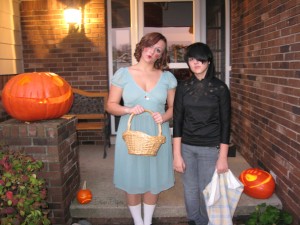 Because anyone can be a teacher, but I was Miss Frizzle.

So when it was Lucas’ turn to experience the joys of dressing up for Halloween, we made sure his costumes weren’t store bought either. Also, I have zero sewing skills, so I love being able to make costumes out of found objects because that doesn’t require that skill. My cousin Chelsea was actually the brains of assembling his costume that year, and she did a phenomenal job.

He was an Ewok for his first Halloween ($10 for the bear snuggle suit from Carters on clearance, and a few bucks for the felt, an old fake broom handle and some foam for the spear- $13)…

This year he’s going to be Calvin from Calvin & Hobbes. His costume cost me a whopping $2 for the red t-shirt at a resale shop. (Now, to be fair, the accessory this year is Hobbes the stuffed tiger, which was a little pricey on Ebay because they don’t make it at the moment. However, it was not bought for the costume-the costume was inspired by that purchase.)

I know that probably by next year, he’ll fight me on making a costume instead of buying one, but for now I’m embracing it because it’s fun. Because I know that I have years of stupid plastic masks-that-break-the-minute-you-put-them-on and polyester-costumes-that-take-forever-to-take-off-for-potty-breaks ahead of me. And if I can convince him that homemade is better, then I will have carried on that tradition with a smile and a trip to Good Will. And if I can’t, at least I can tell him he’s not allowed to be a zombie for $35.99.

Heads up, mommas, if your little pumpkins haven’t started planning for a Halloween costume yet this year, start simmering those ideas in your cauldrons. You could win big this Halloween with Dream Diapers…details to come!