When you’re watching a typical horror flick, there’s always that moment where you roll your eyes and think, “Gee. Yes. Let’s stay in a haunted asylum over the weekend by invitation from this creepy dude. Nothing could possibly go wrong. Right?” Since becoming a bit of an attachment parenting enthusiast, I have those same moments when watching classic Disney films.

Now, I’m not pretending in ANY way to be the perfect parent. Far from it. I admit daily to people my failings because I believe in #transparencyinparenting . My kid eats McDonald’s and hotdogs, and sometimes I don’t keep to his schedule like I should. He climbs high things and plays more than five feet from me at the park. I let him fall and get hurt. I sometimes lose my mind and yell back. He’s not always in bed at the same time every day, and he’s run away from me in the mall enough for me to have learned to NEVER go to the mall without my Lillébaby in tow.

And in all honesty, if Disney character parents practiced attachment parenting methods, every movie would be totally lame and over in like ten minutes. But just for giggles sake here, let’s explore…

If Mufasa or Sirabi had been cub wearing (or let’s face it- watching their kid at all), Simba wouldn’t have had a run in with the hyenas or been in the gorge alone with his creepy uncle.

If that had happened, Mufasa wouldn’t have had to save him; an entire ecosystem wouldn’t have crashed around its ears, and the circle of life would have been a little more lively for Mufasa.

If the Beast’s parents would have been more sensitive to his feelings and taught him how to self-regulate through kindness and compassion, he wouldn’t have become such a jacka$$.

If that had happened, he wouldn’t have turned the old woman away or sentenced his entire staff and himself to many years as household items and a furry monster with fantastic neck rolls.

If King Triton had practiced positive discipline and responded with sensitivity, his daughter wouldn’t have run off to sell her voice for a kiss from a two-legged land freak.

If that had happened, Ursula wouldn’t have been skewered by a sunken ship, and no one would have been subject to her rubbing her butt with pink seaweed during her musical number.

If Marlin had taken time to create a balance in his personal and family life, he wouldn’t have been such an overprotective stalker who pushed his son into rebellion resulting in the less violent and aquatic version of Taken. 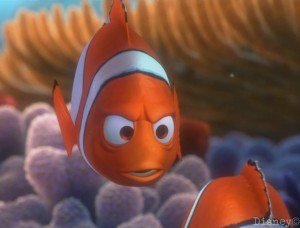 If that had happened, maybe Marlin would have been able to tell a joke in two minutes instead of twelve; his kid wouldn’t have been kidnapped, and Nemo would have more self-confidence and joy despite his disability that his father constantly reminds him of otherwise.

If the King and Queen had practiced safe co-sleeping (whether using a co-sleeper or in their bed or heck, not sticking Rapunzel in her bassinet by the open balcony) she wouldn’t have been stolen by a crazed, anti-aging lunatic from the Renaissance period. (The same concept applies to Hercules in his bassinet on different cloud in the sky…c’mon people…)

If that had happened, she would have grown up without the trauma of being constantly belittled and ignored by her adopted shell of a “mother” who essentially emphasized her worthlessness as a human being and particularly as a weak-willed woman. Maybe then, she wouldn’t have fallen for the first guy who showed her attention and gotten married at 18.

If Boo’s parents had ensured a secure sleeping environment for her (hello? a monitor? and how tall is that bed, like 4 feet up with no guard rail?) and maybe addressed her fears of Randall with empathy and concern instead of ignoring her terror, she wouldn’t have been stolen to have the fear sucked out of her by a demonic chameleon.

If that had happened, she wouldn’t have the insomnia she must obviously still have for the remainder of her life and would probably not seek out very hairy large men with underbites who remind her of the security of Sully as an adult woman.

I’m not saying attachment parenting practices prevent parenting fails; I’m just saying that these catastrophes could have been avoided with some compassion, understanding, a co-sleeper, and perhaps a really awesome baby carrier.

Of course, then I would have no movies to plop my toddler down in front of when my positive discipline skills are diminished and mommy just wants some peace and quiet for five minutes to pee in peace…and trust me, I love Disney. I’m a huge huge Disney fan. Maybe these movies really exist to teach parents a lesson too. 😉

Follow me on Instagram @MommySincerest to see my most up to date posts. The blog is undergoing revision and lots of changes as I have time, but I always keep up on my Insta.