Last week, we asked you to have your significant other or your child’s other caretaker take our survey quiz and to let us know how much they knew about cloth diapering. Well, the results are in! 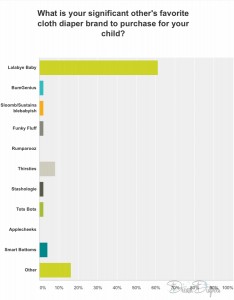 1. What style of cloth diaper does your child wear most often?

It seems that the majority of dads believed (incorrectly) that their children wear pocket diapers, when the majority of them actually use AI2s or AIOs. We use Lalabye, so my husband figured we used pockets (even though we use them as an all-in-two by snapping the insert on top) because the diaper itself has a pocket: logical thinking but lacking the knowledge of cloth terminology. 🙂 Most daddies don’t “speak cloth” and that’s okay. I know it took me a while to get the hang of it too!

2. What material are the standard inserts that are in your baby’s diaper?

A lot of parents thought that the inserts in their kids’ diapers were microfiber, when they are in fact bamboo. One dad even wildly guessed that their children’s inserts are made of gauze, which was a total surprise to that mom!

3. How big is your cloth diaper stash?

This was the biggest misconception that most SOs had. The majority of survey respondents believed their stash was between 21 and 30 diapers, when in fact the correct answer was often more than double that number! One dad even guessed that they had around 20, when they cloth diaper twins! “Clearly, that isn’t the case…” his wife told us! Even my own husband thought we had no more than 50. I just smiled at him and said, “Sure, honey!” (We have a full newborn stash and a large OS stash…so, we have more than 50…).

Overall, it seems that we at Dream Diapers have an incredible group of dads because they all were reported to have done really well on the quiz! Just goes to show, they must actually be listening when we start talking cloth and/or really involved with the day to day care of their child(ren)! We applaud you, dads and significant others!