I wanted to end our series for this month with a story of adoption that didn’t face heartbreak or obstacles along the way because I feel like the more sensational stories often get so much attention that parents wanting to adopt feel that there is no hope for an adoption that is not riddled with complications. This month’s final story of adoption comes from Sue, a retired Special Education teacher who, with her husband Don, adopted their second child later in life. I interviewed Sue over the phone (she lives out West) and transcribed her story of hope and love about adopting Aidan. ♥

In Indiana, the birthmother has 24 hours to make her final decision if she’s had a natural birth and 48 hours if she’s had a c-section. When we got the call, we had nothing; we didn’t even have the crib. We bought it all when he was ours.

I didn’t adopt as a result of infertility. I was 34 (I’m an old mom) when my son Connor was born (close to 35). I didn’t have a bad time being pregnant, but I did have a rough, long labor ending in a c-section, but pregnancy at that age is more risky. I never wanted my kids that close in age, personally, because I don’t think I could handle the chaos. So a few years went by, and then my husband, Don, brought it up. We were not trying but not preventing for a while, which ended up being a good thing. I had developed a condition called pseudotumor cerebri, which caused increased pressure in my brain, putting pressure on my optic nerve and threatening blindness. Weight gain (as in during pregnancy) would have almost certainly caused me to go blind, so we knew it wasn’t even a question.

My sister was adopted, so it wasn’t something unusual to me. I remember her complaining to my mom about it sometimes; “Susie was in your belly, and I wasn’t!” It was as if she wasn’t sure whether or not that made a difference in the way we were treated. Finally, she had a revelation when she saw my mom and grandmother fighting and said to my mother, “You grew in Granny’s tummy, and she’s not nice to you!” My mother replied, “I’ve been trying to tell you!”

My sister worked with birthmothers and did home studies and worked for Adoptions of Indiana- a not for profit. I used to work with the owner, and that’s how we found our attorneys: Kirsch and Kirsch, the adoption gurus of the Midwest. We went to an interview where they told us our options. We wrote a birthmother letter, and they distributed it to prospective birth parents. It’s weird because you include pictures, and it’s like a 3-4 page thing where you’re advertising your family! Usually what they do is once a birth family chooses you, you get to meet with them and be interviewed. It feels like a blind date! We met with them for three or four hours and learned a bit about each other. They chose us, which was really cool, but then we faced the waiting game of whether or not they would change their minds.

Our baby was due June 22nd, so June 7th we decided we would have our last hurrah in New York off Long Island because my husband had a meeting there. June 6th we got the call that the birth mother was in labor! Aidan was 2 ½ weeks early and born on my mom’s birthday!

It was the last day of 3rd grade for my son Connor, so I picked him up, and we had lunch, and then I got the call. After I hung up, I couldn’t find my husband or seem to be able to get ahold of him! So, we didn’t get to the hospital until about four hours after he was born. Just Don and I went; we wanted to make sure he was ours before bringing Connor to see him. It was a weird, surreal thing because he was born on a Friday, so we couldn’t take him home until Monday because judges don’t work on the weekend! So we would hang out in the public waiting room with him in his little bed (that was the weekend we went out and bought the crib and stuff as well and got his room ready) and he came home Monday. The birthmother went home the following day. It all worked. We didn’t have one of those tragedies about the birth mother changing her mind.

Aidan’s birthmother has sent us a letter and a gift every year on Aidan’s birthday since he was 3. They’re always quirky gifts and momentos like books that were his birth father’s or a blanket that was his birthmother’s. We told her that he reads it now and looks forward to it. We send a yearly update too, and we always print off two copies- one for us and one to send out, so it’s neat because Aidan has this record of his life that Connor doesn’t. We write ours at the end of the summer, and she writes his in June. Don writes it. We work together; I give him topics and pitch in ideas. We used to put charts in documenting his development, like “6 months crawls” and we often include “Aidanisms” quirky things Aidan says that are funny or insightful. For example: Aidanism 1- I finished reading a chapter in Tale of a Fourth Grade Nothing, and Aidan said, “I know there’s a lesson in that chapter.” “What is it?” I replied. “It’s that moms love you no matter what.” Gotta love this kid! Aidanism 2- (at our house with company over) Aidan: “Mom-mom-mom…” Mark: “Wait until your mom is finished talking with Carol and then she’ll talk to you.” Aidan: “My mom is a long talker!”

It’s fun because sometimes she’ll refer to our letter in the next letter. And every year, Aidan asks, “Did I get my letter yet?” When we moved, our house sold in April, and we moved in July, so between then we lived in a rental. Aidan asked me, “Are they going to know that we moved so that I get my letter?” So of course I called and arranged so they could get it to the right place. He doesn’t mention it the rest of the year. They do want to meet him later after he’s 18 if he wants to, and he hasn’t said one way or another at this point. 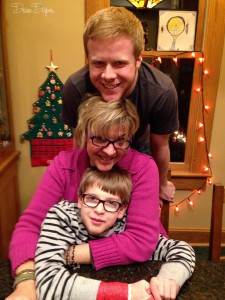 Aidan is 12 now, in 6th grade. We don’t often tell people he’s adopted. It’s his gig; it’s his thing to tell his friends. In first grade they did a book for parent teacher night. Their work is on the desk for parents to see, and in his book there was a page about “Something special about me,” and it was about him being adopted. We carpool with people for soccer, and I don’t know what came up, but he mentioned it to them the other day. He’s very comfortable in his own skin, which is so cool. He says, “They just didn’t think they could take care of me,” and I think it’s so awesome that he understands that.

I think the birth family chose us because they didn’t want Aiden to be an only child. They felt it was important for him to have a sibling. I think they also chose us because they felt like it wasn’t a case of desperation: that we would not raise him to believe he walked on water or spoil him. One thing we learned during this process is that most birthmothers are between 19 and 31. Teenagers don’t usually place their children for adoption; they make a more selfish choice. Adoption is very selfless. Thankfully for us, his birth parents allowed us to be Aidan’s parents. I always tell Aidan, “She allowed me to adopt you.” We don’t use the phrase “gave you up.” As a teacher, I always try to embrace that teachable moment and educate others when it comes up, even if it’s not about my kid.

In the birthmother letter that we wrote, we said something like, “We don’t want it to be ‘my adopted child.’ It’s something about you; it doesn’t define you, just like the color of your hair or the color of your eyes. It’s important that it’s something about you, not the thing about you. It’s more important that you’re kind to people and try hard in school.” My dad had also cut out this poem from the newspaper that echoed my philosophy: “Not flesh of my flesh, nor bone of my bone, but still miraculously my own. Never forget for a minute you didn’t grow under my heart but in it.” My dad used to carry the newspaper clipping in his wallet and reminded me about it when we started the adoption process. We used that poem in the header of our letter, and when Aidan was born, his birthmother gave him this:

We didn’t have his room prepared the day he was born, and he has continued to keep us on our toes with his big, goofy personality and loving soul. We are blessed to call him our son, and that his birthparents allowed us to have this life with him.

I hope this month’s series has opened your eyes to the struggles and joys of adoption, and that if you’ve been considering adoption that you now feel empowered by the men and women who’ve shared their stories this month. Thank you, Deanna, Carl, Alicia, and Sue for sharing your stories with us here at Dream Diapers. We appreciate your voices!